When to delegate, when to say no

A common theme that’s come up in recent coaching calls is a feeling of being overwhelmed with the volume of work. I’ve heard it from newer managers, a founder CTO, a few VPE’s, and some experienced mid-level managers in just the past few weeks.

Maybe you’ve been feeling overwhelmed too.

There’s one tool that I love using when a client wants to talk about how to prioritize the stuff on their plate, or how to deal with the endless list of todo’s that only they can tackle: the Eisenhower Matrix. 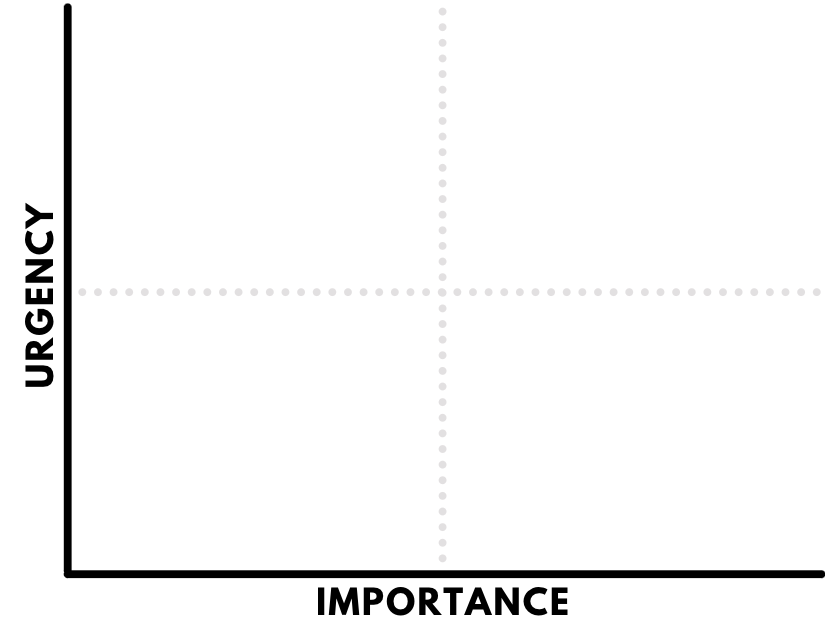 Whenever I hear “there’s no one I can delegate projects to, I can’t say “no” to any meetings or tasks, or there’s not enough hours in the week to get everything done” we draw this matrix.

I then ask them to take each big task from their todo list and plot it on the chart. Folks usually plot their work really quickly; these axes of “importance” and “urgency” seem to resonate!

Every person’s list of big ticket items is different, and where they plot them on the chart will be different, too. It’ll all depend on company context, how equipped they feel to tackle each item, how much support they have or they need, and what they’re actually excited about working on.

If you’re feeling overloaded with work, or if you’re wondering what kinds of work you should punt on or delegate, try this right now. Draw the 2x2 chart, then plot your big work items on it.

Be sure to plot work based on what’s true for you, rather than what you think you “should” be doing. As soon as we start talking about “should”s, this process falls apart. We need to figure out what’s true for you, so that we can come up with a plan that’ll actually work for your energy and your calendar.

Come back when you’re finished, and we’ll talk about what to do next!

What to delegate, and what to say “no” to 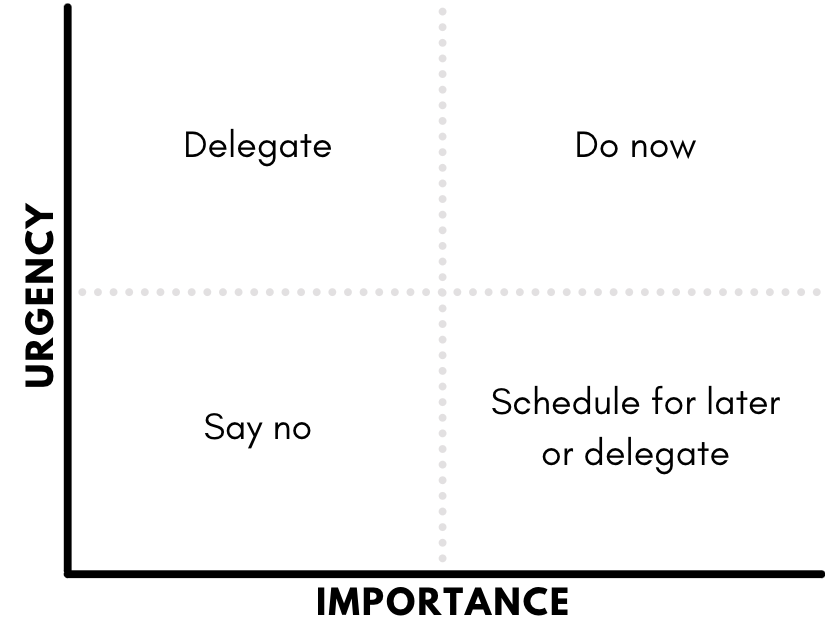 Here’s an example matrix from a manager who’s just been hired to a new team: 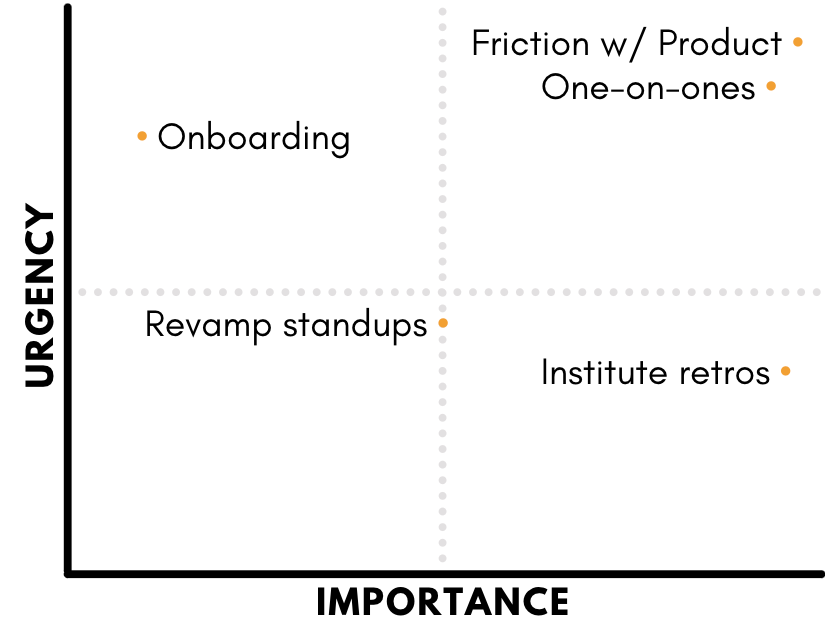 In this example, “Onboarding” can’t really be delegated; it’s a series of calendar events that this person has to go through because they’re a new hire. But at least it’s time-boxed; we know the onboarding meetings will eventually conclude.

(By the way, whenever I see something labeled super urgent but not at all important, I chuckle; this is usually something that a higher-up has requested, but we personally don’t see as particularly important.)

“Revamp standups” is something that this person sees as a need for the team, but it’s not as important as instituting retros or navigating friction with the team’s cross-functional team members in Product. For now, we need to cross revamp standups off the todo list.

If someone is reluctant to say no to a task or cross that low-urgency low-importance todo from their list, I might suggest they write it on a sticky note and stick it to a section of their desk or wall or the back of their notebook to revisit later, like a little “parking lot” for the idea. This way it’s not gone forever, but it’s clear that it’s not a task we’re scheduling, delegating, or doing right now.

If you find it really hard to say no, I recommend you identify the number one thing you’re optimizing for right now in your work. Maybe it’s team health, or work/life balance, or creating clarity—it could be anything! Use this “optimizing for” statement as a reminder that it’s crucial to say “no” to things that don’t match this goal, so you have more time and energy to work on the things that matter most right now.

You can also say no in a way that works for you. You’ve got options!

Schedule for later or delegate

Stuff in this quadrant can sometimes be delegated to a teammate who’s hungry for a chance to grow their leadership skills or do highly visible, impactful work.

Otherwise, head to your favorite method of reminding yourself to check in on something later (I use calendar reminders, others use to do lists or post-it notes!) and add the items in this quadrant.

This manager now has clarity around where to put their energy: in one-on-ones with teammates, and finding time to meet with their Product partner. Their onboarding meetings are immovable, so they’ll need to squeeze their one-on-ones around them.

If the items in this quadrant still feel like too much on your plate, ask yourself which parts of these tasks could be punted on or delegated.

In the case of this manager, they also told their teammates that the one-on-one schedule is going to be temporarily weird. It’s always good to acknowledge when a situation is imperfect or bumpy; it gives your teammates hope that you’re working on making it better going forward!

And in case you could use it: I give you permission to clear your calendar of everything except for the work that has to do with these high importance and high urgency tasks. :)

What fires do you let burn?

Years ago I heard someone say that leadership is about knowing which fires to let burn.

Sure, you can groan; we all inherently know it’s true that we need to let some fires burn. But that doesn’t make it any easier.

At the heart of this idea is that there will always be fires burning. It’s impossible to put them all out. As a leader, most days you’ll probably be reminded of them all. And if you spend all your time trying to stamp out fires, you’ll never be able to look ahead, strategize, or actually grow and evolve.

So it’s our job as leaders to figure out which fires to let burn. Sometimes we just need to walk away and return another time, even if those fires will keep growing. This will help us invest our energy, attention, and skills in the fires that we are best-positioned to address today.

This process, as challenging and imperfect as it is, is a starting point. You might be surprised at what shows up in your matrix.

New opportunities for your teammates to stretch may appear. You might finally figure out what to focus on today, and you may even unlock a new way to feel progress and success as a leader. You might also be frustrated with me for even suggesting this! :)

But if you’re overwhelmed by all the fires you see at work, give the 2x2 chart a try.

In my next newsletter, I’m going to talk more about how to effectively delegate to your teammates. Delegating is an art, not a science—and it sometimes feels like it requires more of you than just doing a task yourself! I’ll help you sort it out.

I've transformed my renowned in-person workshop for managers into this self-paced virtual program. It's accessible, actionable, and will level you up each step of the way. Learn more!

See all my resources on...