My team is going in circles. Help!

“Lara, I’m a manager, and my team is kind of going in circles. We have a critical project deadline, I’m trying to keep everyone moving forward, but it’s almost like we don’t know who’s in charge of what and it’s slowing us down. One thing to note, we typically try to solve problems as a team. Do you have any tips?”

Oof, yes, I’ve been there! The team has a clear roadmap with well-defined projects and deadlines. Maybe you even have OKRs, and the team has enough folks to do the work. But despite knowing what needs to get done, something isn’t clicking.

It’s time to get clearer on what everyone’s role is. You can define that together, through a more empowering approach, or you take a more directive angle.

Some leaders stay on the empowering end of the empowerment/direction spectrum; whether it’s because they’re comfortable with those skills, they want everyone to have a say, they (and/or their team) have a desire to be consensus-driven, or because they just don’t know how to or are afraid to be directive.

This isn’t a bad thing, at all. Given that you said you try to solve problems as a team, I’m going to talk about how to use a more empowering approach effectively in this newsletter. But there are also times when it’s important to be more directive with your teammates; I explore how to give direction effectively in my next newsletter!

Identify and document the most important outcome

I want to assume you’ve done this already, but just in case you haven’t: write down what your team is aiming for, on this project. Make sure it’s something that’s observable, fact-based, and doable. What are you measuring at the end of the project? (OKRs are handy for this!)

Make sure that this clear, measurable, observable outcome is documented in a place that’s visible to everybody who’s working on the project, and visible to your stakeholders, too.

Repeat this outcome statement whenever you can. Open presentations by saying it, repeat it in project updates, etc. Keep it top-of-mind: what is the #1 thing we are driving towards?

When teammates are floundering, or are going in circles, it’s either because the road ahead is ambiguous, or it’s because they don’t have what they need to be successful, or both.

Clarify the road ahead

You’ve already identified the destination. Now it’s time to clarify what people are supposed to be doing to get us there.

You have the option to tell people what to do and who owns what, or you can lead them through an empowering exercise (like the Team Leader Venn Diagram below) to generate a responsibilities document together. In this newsletter, I’m focusing on the empowering side; next time I’ll talk about giving direction!

Follow the how-to steps listed here to create a shared roles document. I recommend doing this exercise with your peer leaders on the team. You might start by identifying each role’s high-level responsibility, like in this example with a product manager, engineering manager, and engineering lead: 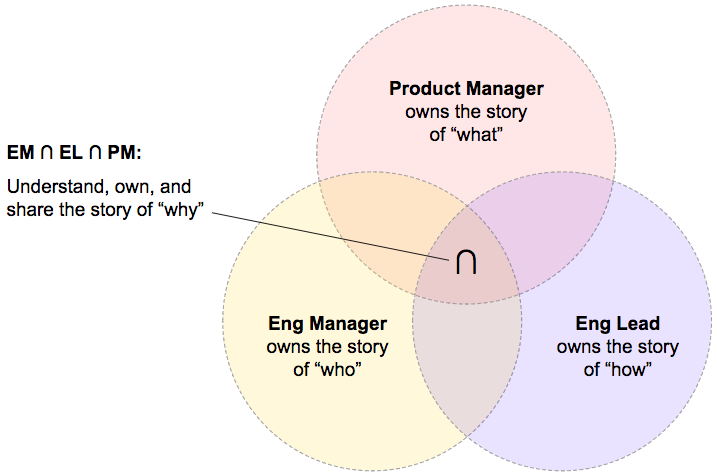 Then generate a list of responsibilities/outcomes for each role: 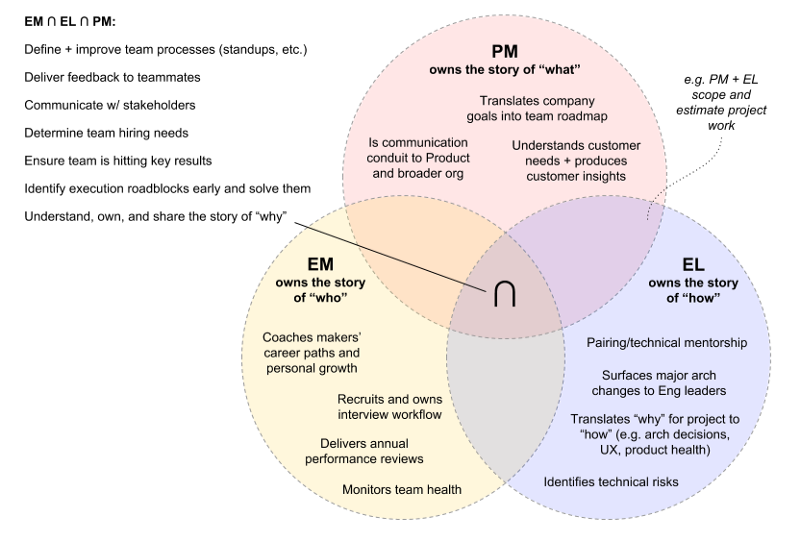 Notice that we’re not listing individuals in the diagram; we’re talking about role responsibilities instead. You might have lots of engineers on the team, but there should just be one circle for each distinct role. (It’s totally fine to have a separate circle for each type of engineering role, if that’s useful to your team for assigning work and outcomes.)

Finally, share the outcome of that meeting with the rest of your team. Answer questions, add clarity, make tweaks as needed.

Feel free to run this as an experiment, too; say that you’ll be using this approach to define roles for this project, and you’ll be iterating on it and updating it for future projects based on what the team learns.

Your team should now have a clearer sense of their roles, which will help them identify what they’re missing to get their job done.

Identify what the team needs to be successful

Let’s say you create that shared document, talk it through with the team, and then there’s pushback and frustration. Or worse: let’s say your team responds with (stunned, annoyed, or mystified) silence.

Don’t worry. Remember; you’ve been going in circles before this. This is a huge opportunity for you to acknowledge that the whole team wants to move forward!

“Yes, this new role document is an experiment. But we’re optimizing for moving forward, and ending the relentless going-in-circles that I know you all have been frustrated with. So: what do you need, in order to be successful with your role this time around?”

If the team continues to feel stuck, I recommend utilizing a coaching approach by leveraging truly curious open questions. Draft a list together of what folks need, and make the doc shareable. This way, you can go find out whether or not you can get the team what they need, and they can hold you to it.

There will be some things on their list that you can get (folks from other teams to help with code reviews! A clearer definition of what the MVP should include!), and other things that you can’t (you can get an extra two weeks before the deadline, but no more). Demonstrate that you have followed through to try and get them what they need.

Continue to partner with your teammates if they’re blocked, or throwing up their hands in frustration, or just digging their heels in. Ask open questions about what’s in the way, what you could run as an experiment, and what tradeoffs are they okay making this time around.

Approaching your team with an empowering practice like this doesn’t always end with the ideal outcome. Maybe you don’t agree with the team’s decision on who does what, and maybe someone isn’t quite getting the hang of their defined responsibilities. But by identifying the project outcome up front and routinely checking in with your teammates, you’ll start moving forward, rather than looping in the same old endless circle.

You also might be delighted by the new ways to solve problems that your teammates suggested, that you could never have envisioned. And of course, you’ll be building up tons of trust along the way, which is crucial for solving new, messy problems going forward.

In the next newsletter, I’ll walk through being more directive in this scenario—an approach that’s uncomfortable for a lot of people, but can actually end up being surprisingly empowering for your team.

Check out my new Setting Expectations as a Manager video course to balance being empowering and being directive as a leader, and know when to switch up your approach. Or hire me to train these skills at your organization!

See all my resources on...