Note: this post was written by my father, Bill Hogan. I asked him to share his thoughts on how he approached parenting two daughters, given that we ended up well-equipped to confront sexism and other tough challenges for young women in our respective industries. Dad focused on a particularly great anecdote from our childhood, which I heard about a few years later. For me, hearing how he gracefully challenged sexist attitudes modeled how important it is to stand up for what’s right, regardless of how deaf those ears may be. My parents gave my sister and me the strength and tools we needed to stay strong in our careers, and to support others in doing the same.

I have been encouraged by my oldest daughter to share a few thoughts involving her upbringing. I have never blogged before and wish to make it very clear that the following is intended to encourage readers to reflect on their own experiences as a parent or child and are not intended to project an image of perfect parenting. My purpose in writing this post is to provide an example of the importance to stand up for your beliefs regardless of outcome. In the same spirit of sharing this story with my daughter, I have chosen to share it with others as a means for encouragement.

In our household, high values are placed on faith, academics and the arts. Our daughters attended public elementary and high schools and developed good study habits paired with very good grades. Each girl participated in a variety of extracurricular activities but, as parents, we placed some limits to avoid over-scheduling. Each girl developed a strong individual identity but we were to learn that there would be times when we would need to advocate for them. Looking back, the first of these occurred in 1994.

Our oldest daughter is Lara and on her ninth birthday her paternal grandmother presented her with Molly, a popular doll from the American Girls Collection. The doll was a very generous gift and much loved. Molly represented a typical 1944 elementary school girl and like many dolls, it came with accessories. While I too appreciated the gift given to my daughter, I had strong misgivings regarding two of the accessories. The first of these was Molly’s “student report card”.

I loved that the report card did not attempt to represent Molly as a “trophy” child. However, being a parent and middle school math teacher, I was disappointed that the doll manufacturer chose to assign the lowest grades to the most gender-biased discipline in American schools. 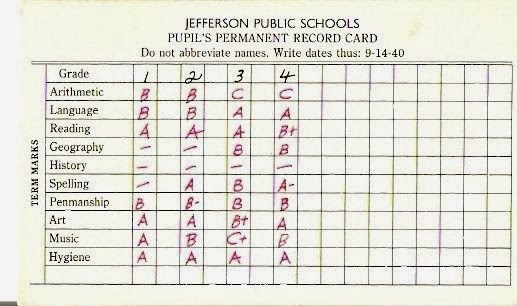 Furthermore, embedded in the accompanying pamphlet, Molly’s School Story was the statement that “she dreaded arithmetic”. I was prepared to disregard the report card but now found myself reacting very strongly to the pamphlet and I believed I needed to write a letter to the Pleasant Company (owner of the American Girls Collection).

“I think I understand the connection you are attempting to make with youngsters but believe you are doing them a terrible disservice. Contemporary educators are going to great lengths to correct the biases that have slanted science and mathematics along gender lines. The Molly and arithmetic scenario fails to assist this effort, in fact, it degrades the situation further. Too many impressionable children (especially young girls) might come to accept the falsehood that excellence in mathematics is determined by gender”.

Having mailed the letter I felt a sense of relief and even pride in not letting this “situation” take place without some documented action. The company’s response came a month later.

The letter I received (and still have in my possession) explains that their decision was not to show an unrealistic report card filled with A’s. It further states that that what is important in Molly’s story is that she recognizes the need to improve and work hard (note: this is not stated in the accompanying pamphlet). The letter’s author also felt compelled to remind me that a “C is definitely not at F!” Completely absent from this response was any reference to the offending phrase that Molly “dreaded arithmetic”. Lastly, demonstrating further that they missed my point regarding gender biases in science and mathematics was the statement “if English had been selected for a subject….English teachers from all over the country would be writing”.

So in spite of my best prose, the customer service representative seems to have judged me to be a disgruntled math teacher and moved on. I’ll admit that my expectations of the Pleasant Company’s response to my letter were not all that great. It is just that I felt compelled at the time to act on my beliefs and advocate for my children and students. While I don’t recall the particular circumstances, there did come a point when I chose to share this experience with my daughters. I wanted to let them know that there are times when we need to advocate for others and not be intimidated by the situation or circumstance.

Nowadays, we have a multitude of means to express our thoughts and challenge authority. The power of letter writing in 1994 pales in comparison to the power of online advocacy. Yet, in some simple way, writing that letter was one of my best parenting decisions and I encourage all of us to continue the good fight.