The importance of donuts 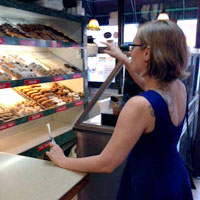 Eating a donut is an integral part of my career celebration process.

Years ago, I found that whenever something awesome happened in my career – maybe I got published, or promoted, or launched a project – I wouldn’t take the time to celebrate the achievement. I’m an achiever by nature, the kind who feels like every day starts at zero. Not deliberately marking these moments left me feeling like I wasn’t actually accomplishing anything. “Oh cool, that A List Apart article went up,” I would think, then move on with my day.

Once I realized that this was happening, I decided to be deliberate about marking achievements by eating one donut. Well, sometimes more than one, if it’s a really big deal. The act of donut-eating has actually helped me feel like I’m accomplishing my career goals. As I started to share this idea with more people, I found that it resonated with others, especially young career-driven women who are routinely achieving goals and furthering their career but don't take the time to note their own success.

I decided to start celebrating in a public way so that more people may be inspired to find their own ways of marking their career achievements. These are those donuts.